Skip to main content
In line with the latest guidance, Kresen Kernow will be open from mid-April for pre-booked researchers. See our Visit page for more details → 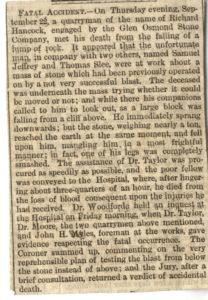 Richard Hancock, from St Austell, wasn’t as lucky. In June 1862 he wrote home to his mother from Victoria: “I think we shall strike some thing better…there is a lot of Cornish men hear…” (BRA1678/9). Two years later he had become a quarryman in South Australia where, sadly, he was killed. His colleague, John Pascoe, wrote to Richard’s brother (also in Australia) that “a massive block came down in a instant… a rock weighing [nearly a tonne] fell upon his right leg with such a force that it all but cut it off from his body…” This newspaper article describes the accident. (both BRA1678/11)