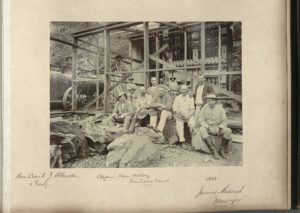 We are also exploring our collections relating to the Cornish overseas diaspora, particularly in areas such as Australia and Africa, where Cornish migration greatly affected indigenous populations. Thousands of Cornish people mined in South Africa in the late 19th and early 20th centuries, often in superior positions to African workers. Here, arch-colonialist Cecil Rhodes is pictured in Zimbabwe, presumably with mine workers, in a photo album belonging to Cornish mining engineer, Jervis Veale (X955/1/11).