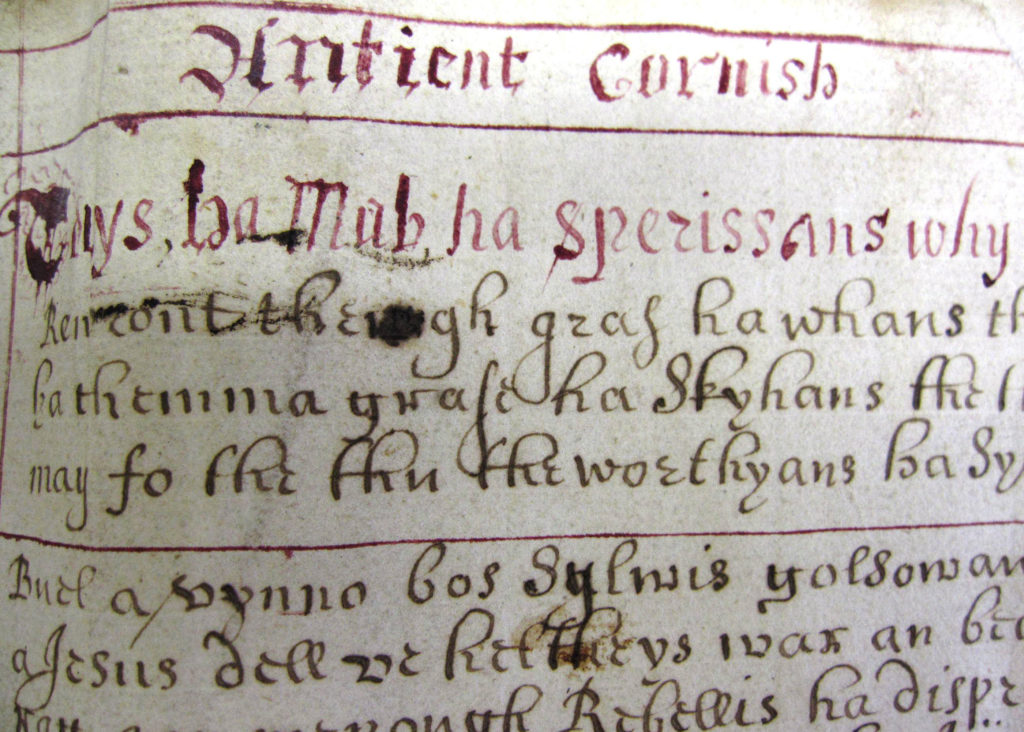 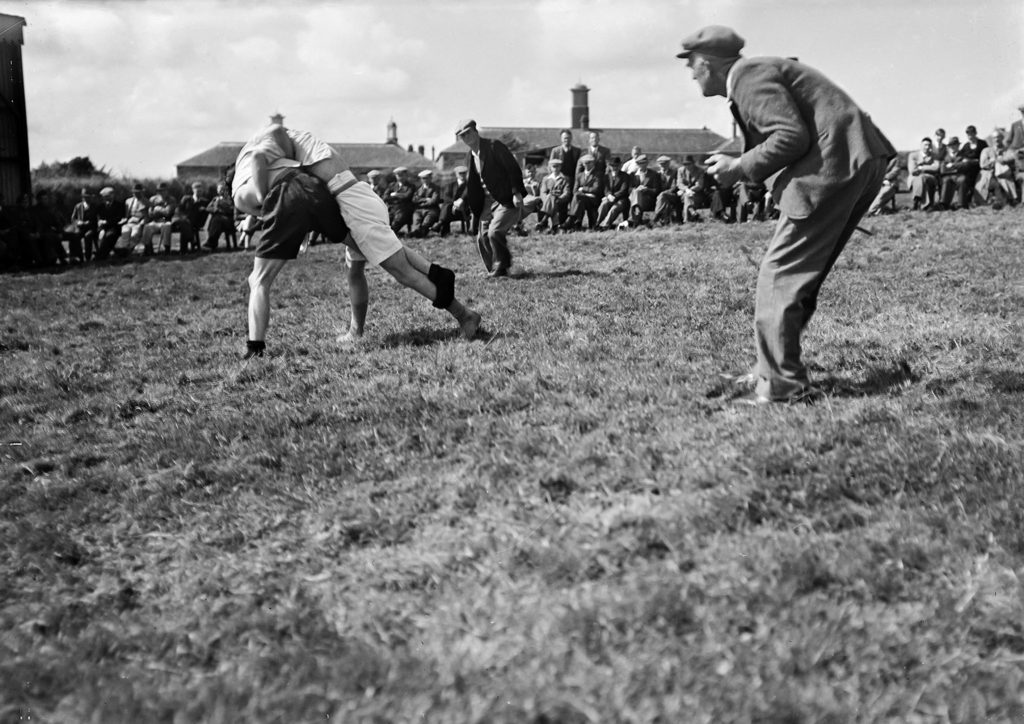 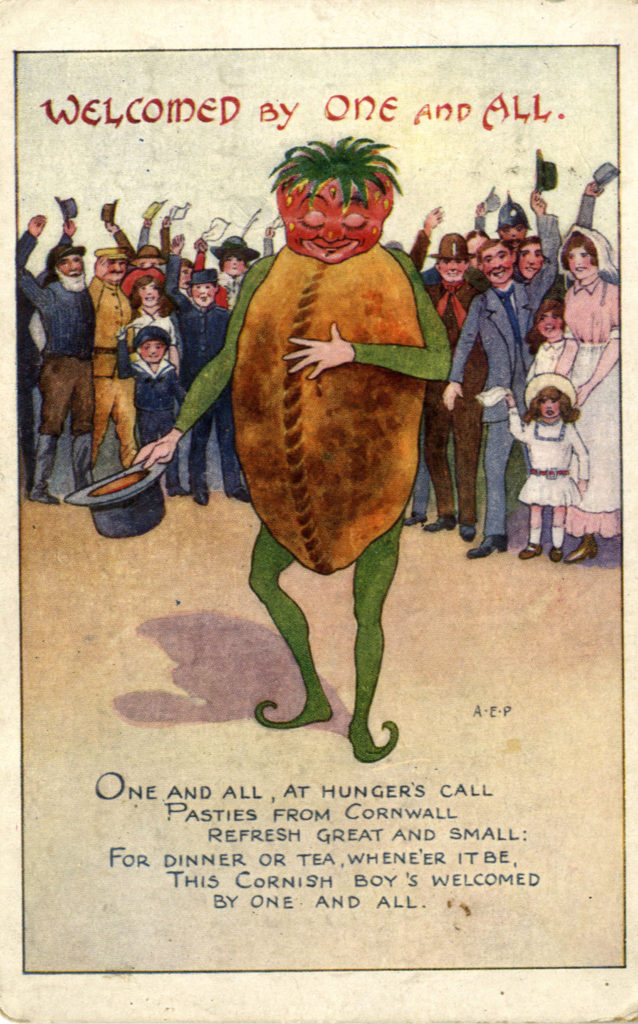 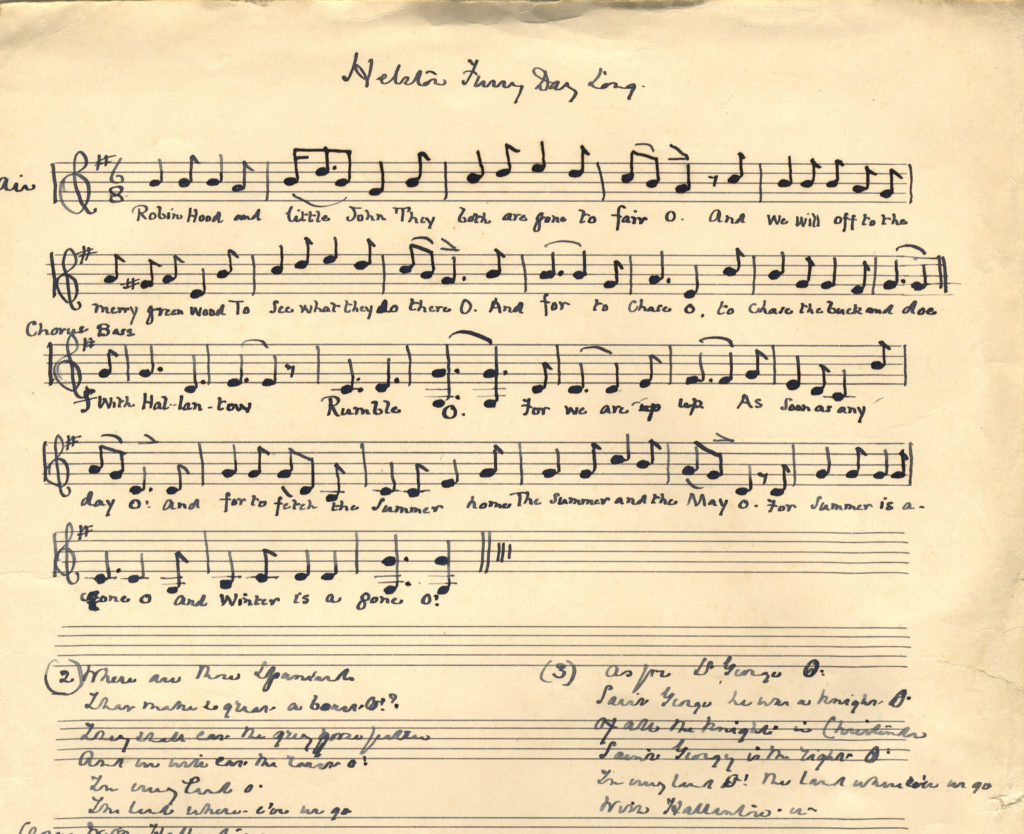 Cornish culture is not easy to define, and means different things to different people. For some, it may be about music or traditional festivals. For others, it could be about rugby, pasties and cream teas. Because culture is not always tangible it can be tricky to find in our archives. However, this brief guide will give you some pointers.

Kresen Kernow holds a growing collection of recordings of Cornish music. This sound archive complements the books, pamphlets, newspapers, music programmes and leaflets which also offer insight into music in Cornwall.  The sound archive includes recordings of brass bands, and Kresen Kernow is home to the John Brush brass band archive which provides a comprehensive record of these bands. The Cornish Music Archive consists of records collected by the Cornish Music Guild, 1987-2015, including original compositions, traditional music, hymns and carols. We also look after a variety of Cornish Christmas carol (or ‘curl’) books including Davies Gilbert’s ‘Some ancient Christmas carols’ which helped revive the tradition of carol singing, and books by Thomas Merritt, who composed many Cornish carols. We hold original manuscripts from some composers, and look after the records of Maria Yelland, a singer from Cornwall known as ‘The Cornish Contralto’. Kresen Kernow also looks after published collections of folk songs, as well as commercial recordings from Cornish artists such as Brenda Wootton.

A variety of records survive linked to local festivals, such as Flora Day in Helston and May Day in Padstow, although there is no comprehensive archive on this subject. References can be found in the newspapers, as well as in our photographic and postcard collections and individual diaries and letters.

Cornwall is known as a home of legends, many of which have survived due to the bardic tradition of committing tales to memory and retelling them. The demise of storytelling could have led to the loss of these myths and legends, but the work of three Victorians (William Bottrell, Robert Hunt and Margaret Courtney) in recording and publishing them has preserved many of the traditions.

Among our book collection are volumes by all three of these authors, as well as other books and articles on the subject, including published re-tellings aimed at children.

The pasty is Cornwall’s most famous edible export. Kresen Kernow holds a 1746 recipe for a venison pasty, as well as many other recipes for Cornish treats such as saffron cake, splits and starry-gazey pie, in numerous published books.  An insight into food in the past can be seen in menus, photographs of meals and household account books.

The Cornish Gorsedh was founded in 1928 and exists ‘to maintain and give expression to the national spirit of Cornwall as a Celtic country’. Kresen Kernow holds minutes and some papers for the Gorsedh, as well as records of Esethvos Kernow, the Cornish Eisteddfod, from 1979-1993.

Recommended reads: The Cornish language and its literature by Peter Berresford Ellis, 1974; A popular dictionary of Cornish place-names by OJ Padel, 1988; Music in West Cornwall: a twentieth century mirror by Geoffrey Self, 1997; Hark!: the glad sound of Cornish carols by Hilary Coleman and Sally Burley, 2017; Scoot dances, troyls, furrys and tea treats: the Cornish dance tradition by Merv Davey, 2009; The Festivals of Cornwall: ritual, revival, reinvention by Alan M. Kent, 2018; Folklore of Cornwall by Tony Deane and Tony Shaw, 2003; Myths and legends of Cornwall by Craig Weatherhill and Paul Devereux, 1994; Cornish Tales by Eric Quayle and Michael Foreman, 2012; Cornish Treats by Mary Wright, 1986; Gorseth Kernow: the Cornish Gorsedd: what it is and what it does by Rod Lyon, 2008

Watch: you can watch videos about many items in our collections, including William Scawen’s manuscript, on our YouTube channel.